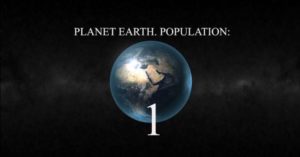 It is a long, perilous journey and one that Darren has to endure. Not only must he stay one step ahead of the alien scout ships that relentlessly search the planet, he must also survive alone in the wild while also battling his own guilt and remorse. His weighed-down backpack and numerous supplies make his journey even harder. It is on this journey however that Darren begins to find new truths and new insights into life and existence.

Darren finally makes it to Misha’s parents home only to discover an empty house and the discovery that Misha is dead – she was killed before the invasion. His journey it seems was for nothing. Anger and despair washing over him, Darren takes a car and speeds off to the cemetery where Misha was buried, only to learn via her headstone that she was killed in a car accident. This revelation destroys Darren, he now has nothing left to live for – it is as if he himself had killed Misha.

With no future and only a painful past, Darren shuffles away, finally discarding the heavy goods he has carried with him for so long. But this moment of shedding his possessions is the catalyst for change within him. For the first time in his life he learns that he can live simply and freely and this is what Misha wanted for him all along. Experiencing a perfect moment of calm and peace, Misha appears to Darren and he knows he has been forgiven.

It is at this moment that two alien scout ships rise up. Darren is surrounded and he knows his end has come, yet he faces it with love and serenity. He achieved his journey in ways he could never have imagined.

The last representative of the human race dies forgiven and at peace.